Nu er det snart muligt for filmfans at eje rekvisitter fra Hollywoodfilm som “Vertigo”, “Alien”, “Raiders of the Lost Ark”, “Once Upon a Time… in Hollywood” og “Star Wars: Attack of the Clones”. 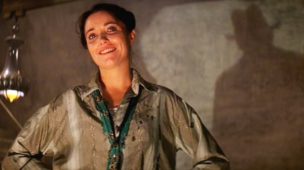 A Raven bar and Well of Souls Staff of Ra headpiece from Steven Spielberg’s Raiders of the Lost Ark. A key plot point in the film, Indiana Jones (Harrison Ford) used the headpiece in the Map Room at Tanis to reveal the location of the Well of Souls, the resting place of the Ark of the Covenant.

Two versions of the headpiece appear in the film. The first version was seen in the Raven Bar sequence and inside the Well of the Souls. It features simple detailing on the headpiece’s feathered bird, and smaller characters around the border of the headpiece. This was the first version made by the in-house production team. The second version was constructed by an outside jeweler specifically for insert shots and features a more-detailed bird sculpture and larger characters around the edge, so that they were more obviously text characters on screen. The simpler ‘Raven bar’ style headpieces were used for the majority of live-action filming

This ‘Raven bar’ style headpiece was acquired directly from a close family friend of the film’s Construction Manager Bill Welch. The circular headpiece is fabricated from resin, and features a plastic, amber colored crystal “eye” adorns one side. The lot features a metallic goldtone finish, and a chain-like detailing around the perimeter. A slot is situated at the bottom where the piece was attached to the top of the wooden staff.

The amber crystal is missing from one side and the headpiece displays a worn finish, with its color altered from age in some areas. Bill Welch’s family has written a letter of authenticity detailing the history of the piece, which is included. Also included is a letter from the family friend of Bill Welch who was gifted the piece by Welch in 1990, which states in part “During this visit Bill [Welch] gifted my family the headpiece for the Staff of Ra, telling us it was the one used on the staff in the film.” This is believed to be the only ‘Raven bar’ style headpiece ever offered at auction.